Building a Portable Pitching Mound (for under $100)

It's a curse being an engineer. Your logical side won't let you buy anything that you can make (ask my wife about our home-made refrigerator).  Its especially difficult not to start drawing up blueprints when you can make the item for less than the cost of shipping. That turned out to be the case when I priced portable pitching mounds. Starting at $500 (with the good ones nearly double that), the shipping was $125.

That's more than the price I built one for. If you're building it for indoor use (or porting it), you could use non-treated wood and knock the price down another 30%.  I intend to level up a spot and leave it in the rain so I went with heavy treated wood.  Here's what I constructed.

The height is 10 inches, the height of a major league mound (it was 15" before 1969).  The length is conspicuous, the length of a standard piece of plywood. It sports a 2 foot level section and a 6 foot downhill slope.  The slope is about the full stride of a 6 foot major league pitcher.  Where some commercial mounds leave a 2" step, I wanted mine to gracefully merge into the ground in case my son starts striding like Mark Buehrle.  The mound is 4 feet wide - the width of the plywood.

So you start out with a piece of plywood and two boards but before you leave Home Depot, have them slice the 8 foot long plywood into a 2 and 6 foot section - easier to get home and a much straighter cut than you can do with your Black and Decker.  I also had them cut the 16' 2"x10" into a 10 foot and 6 foot section.  So you now have two pieces of plywood, three ten foot boards and a six footer.

Once home, take both of your ten foot planks, mark off the two foot level sections (on opposing ends) and make a line connecting them for cutting (see red line below).  I used the six foot side of my plywood as the straight edge for marking the cut line.

Once you rip the first board, you'll have the bookends of your frame.  The second plank will yield two more for the spine of the frame.  You could probably get away with three total but there's not much utility for the fourth piece other than another brace.  The repeated stride and landing down the ramp is bound to wear down the plywood if it's stretched over too wide a span.  In engineering speak, "more is better and too much is just enough".

Lay your ramp spines out as a frame and you'll see that this thing is going to be a tank.  My treated boards were very wet and heavy compared to dried lumber.  One was so soggy that I had to cut it twice - once at half depth as my tired old Skil saw couldn't rip the full plank.

So here is my frame laid out and ready to hammer:

You can see that I've cut the remaining 6 foot piece into the four foot backing.  It's best to lay the plywood on it and mark it instead of measuring it to four feet as the plywood size can vary by a quarter to half inch.  I used the remaining two foot section and the ten foot board for a cross bracing.  I also tacked in a couple of 2x4s to cross brace the studs where they get thin.  I tried to predict where the weight would be applied in my son (a right hander) would land and beefed up in those areas.  Here's my fully framed skeleton. 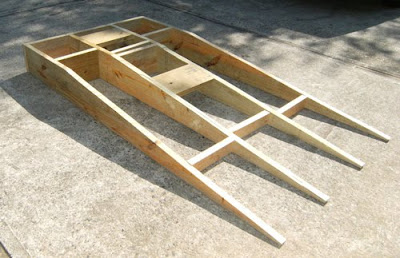 Decking
I started to go with decking screws but opted at the last minute for ribbed nails.  You can go either way. One final tip; align and set your 6'x4' plywood section first.  When you mate the smaller section, it won't matter as much if you are three degrees off plum since it only runs two feet.  Do the inverse and you could have a half inch overhang at the end.

Pitching Rubber
I found the perfect pitching rubber on Amazon.  It has four corner nails instead of nails along the bottom of the rubber which made it easy to substitute bolts for the nails. 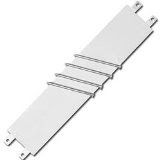 Surfacing the Mound
My son only has metal spikes and they would chew up our handy-work pretty quickly.  We initially thought we'd go rubber spikes and the outdoor green carpet (astro-turf) from Home Depot.  It would have cost only $35 to cover it but frankly, the carpet looked pretty flimsy.  Thin and frail enough that even rubber spikes would quickly wear through it.  You never paint pressure treated lumber (though you can seal or stain it), so green paint is out.  Someone suggested a couple of large doormats as they're built tougher to handle the treading.  I'm still in the hunt and will let you know when I find the ideal surface.

Wheels
If you go the indoor route, it would be easy to bolt on two wheels to the frame.  For a couple of dollars, I'd also screw in a couple of screen door handles to make it easy to hoss around.

I hope this is helpful.  I'll upload videos to http://www.powerchalk.com as we use it.